The first meeting and seminar of the CulTY project (Cultural Tourism for Youth) held at the Vesuvian Institute, Castellammare di Stabia, Italy in June 2016. People from India, Greece, Italy and Vietnam participated on behalf of their respective organizations – OSVSWA, Action Synergy, Pegaso and CSDS – to discuss various tourism practices followed in their respective countries and benefit each other with the same. Various in-bound as well as outbound activities kept the spirit going for the entire span of the event i.e. 5 days.

Every delegation from each of the four countries prepared an overview of their countries and their main culture elements. Site visit to Villa San Marco and Villa Ariaana was also arranged to study the history as well as infrastructural designs of Roman era – in Castellamare di Stabia. Light was also thrown upon the restoration of the Stabiae centers that were once completely buried because of the eruption of Vesuvius. Samples and unexplored parts were shown to give a live evidence of the same and even the work under progress sites were paid a visit that describe the passion in which the work still goes on, giving us a remarkable experience at the villa.

Photo Gallery from the CulTY meeting in Castellammare di Stabia 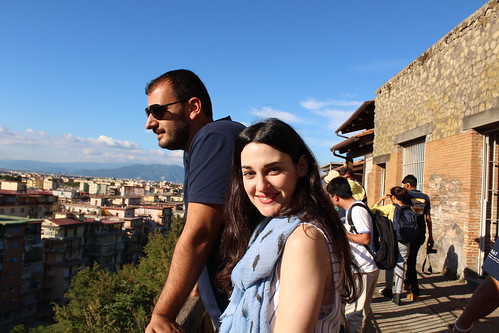 Youth Workers practiced methods of promoting Inter-Cultural Tourism amongst countries and continents by doing various case studies in which formulation of B-Plan theoretically, taking into consideration its financial aspects was taught and one case study was taken up by each country’s participants to implement the same. Preparing an online website and methods of effective blogging was also taught to keep up with the pace online and promote tourism actively, offline as well as online.

With a hope of strengthening the relations between the Asian and European nation, the program was finally called to an end with mesmerizing music and dance forms of the Roman era, expressing the inexpressible, and touching souls with its sweet melody followed by a sumptuous and delicious Italian cuisine. During these five days, youth workers from Greece, India, Vietnam and Italy exchanged ideas, moments, dancing movements and jokes, got the opportunity to get closer to one another, and at the end they earned valuable memories and intercultural experience. Till the next meeting of CulTY in Vietnam in December.